In a poll conducted by The Signal, 26.6 percent of 105 randomly surveyed students gave President Becker and the university a “C” or “average” for the decisions made during the snow storm. 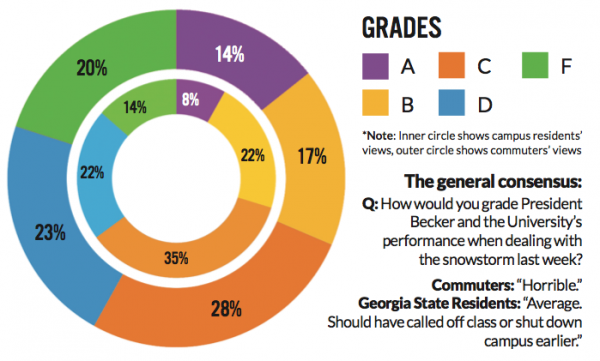 Out of the students who gave higher grades to the university, 14.2 percent gave an “A” or “excellent” and 17 percent gave a “B” or “good.”

“I understand why it would be frustrating because the announcement came late in the day, but for commuters with late classes, I feel they handled it well,” senior De’Luir Schaffer said.

Many of the surveyed students said that the university should have been closed for the entirety of Tuesday instead of only the second half of the day so traffic and accidents could have been avoided.

Junior Manal Mourad gave the university an “F” or “horrible” along with 20 percent of the poll participants.

“I thought the situation could have been handled differently. There [were] notices all week of snow on Tuesday. There are 40,000 students at GSU. There seemed to be absolutely no consideration on part of the university on how thousands of students could leave in an already crowded downtown Atlanta if there was a weather emergency,” Mourad said.

Other students felt that the inconvenience of closing the university in the middle of the day and the traffic problems that followed were not the university or President Becker’s fault.

“He dismissed us early though to get home…For the others, I feel bad, but what else could he do? Fly us all home individually?” senior Emmeline Loubeau said.

Sophomore Lauren Little felt that Georgia Southern University, along with other universities in Georgia, made the right decision by closing for the entirety of Tuesday ahead of time.

“I think that all classes on Tuesday should have been cancelled. Most universities in Georgia had already closed, including Georgia Southern, even though they did not get any snow. Georgia State is a commuter school and should be extra cautious about weather situations. A lot of students ended up trapped or stuck on the way home from their morning classes,” Little said.

Little gave the University a “D” or “Needs Improvement.”

President Becker released a message on Friday, Jan. 31 addressing the safety concerns during the snow storm as well as thanking the faculty who stayed behind to make sure places like the dining hall were running for students and staff.

“The transportation challenges experienced by members of our Georgia State community greatly exceeded expectations. Our students, faculty and staff are to be admired for the courage, fortitude and perseverance they demonstrated as they battled and endured the elements and traffic to make their way home,” Becker said in the message.

He then announced a plan to appoint a task force to review Georgia State’s weather emergency protocols and operations and revise them in accordance with the issues faced during the snow storm.

“We will coordinate our work, where appropriate, with city, county and state officials to make certain that our revised plans are designed to work within the larger context of the Metro Atlanta region,” Becker said.

Becker ended by extending his gratitude to Georgia State employees who stayed behind to keep residents, University Police and staff fed in the dining halls as well as the employees of the Facilities Department who cleared sidewalks and roadways to ensure safety.

“I think President Becker did an excellent job of communicating with the university staff and students to promote safety for all those involved at GSU,” Davis said.

Other students brought up the fact that Georgia does not often experience severe weather. They felt it was only natural that the university did not have adequate safety measures in place.

“They did the best they could. Who would’ve known this disaster would have happened considering this is uncommon weather in Georgia,” freshman Hunter Shumate said.