Robert Joseph Chastain, 29, of Harrisville, Mo. and Kritin J. Callaway, 25, of East Lynn Mo., were suspects in a robbery at a northeast Covington, Ga. Walmart on Wednesday afternoon before leading police on a four county pursuit, Captain Ken Malcom of the Covington Police said. 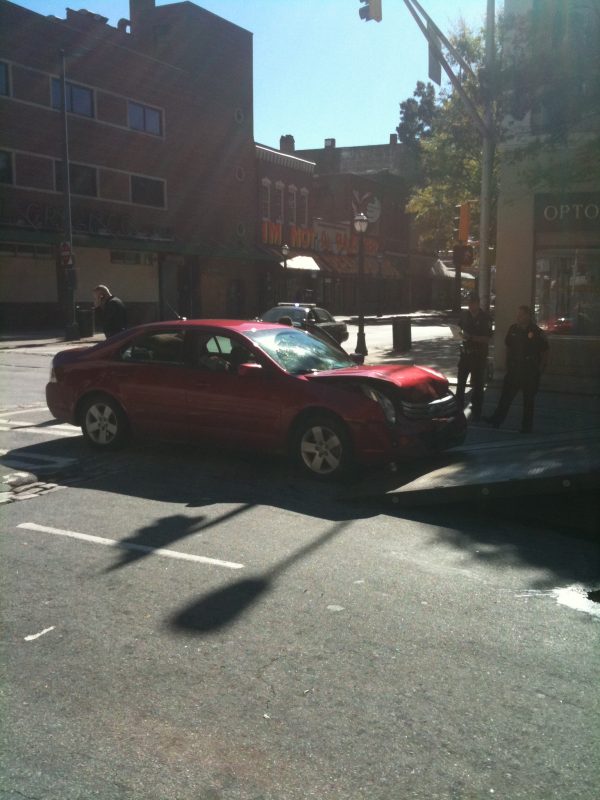 Chastain was driving the maroon Ford Fusion through the Walmart parking lot when Callaway reached out of the vehicle and stole a purse from a shopping cart, Malcom said. The victim of the purse snatching, a 51-year old Oxford, Ga. woman, was loading groceries into her own vehicle when the robbery took place.

The victim then tried to regain possession of her purse as the suspects drove away.

“The victim was entangled in her purse and was dragged approximately 300 yards through the Walmart parking lot,” Malcom said.

Police issued a look out for the maroon Ford Fusion at shortly after the 12:47 p.m. robbery. Covington Police Officer Brian Capps saw the vehicle on Almond Road at Interstate 20 approximately 15 minutes after the lookout was issued, Malcom said.

“When Officer Capps checked the vehicle registration information, it retuned that this vehicle was stolen out of Wisconsin” Malcom said.

The chase began after Capps attempted to stop the vehicle as it traveled west on Interstate 20. Capps chased the suspects through Newton County, Rockdale County, DeKalb County and Fulton County.

A Georgia State Highway Patrol officer aided Capps when the chase entered the city. The officers pinned the Ford, causing damage to the front-end of the vehicle and the front window to shatter.

Chastain and Callaway were taken into custody by Covington police around 2 pm.

Atlanta Police closed two blocks of Martin Luther King Jr. Blvd. between Peachtree St. and Forsyth St. for about one hour to investigate and remove the vehicle.

The wrecked Ford Fusion was transported to Covington, where police continued their investigation. No information was available regarding the stolen vehicle’s rightful owner or when the car was reported stolen in Wisconsin.

During the chase, the stolen Ford Fusion caused an accident on Interstate 20 in DeKalb County, Malcom said.

Officials in the DeKalb County Police Department were not immediately available for comment regarding accident or whether there were injuries.

The 51-year old purse snatching victim in Covington was treated at an Atlanta area hospital for non life-threatening injuries.

There were no civilians in the area that witnessed the crash, and police at the scene were not taking statements or questions.